The ZEBx Podcast: Decarb Lunch June 2021, The Builders Have Spoken: The Cost of High-Performance Construction 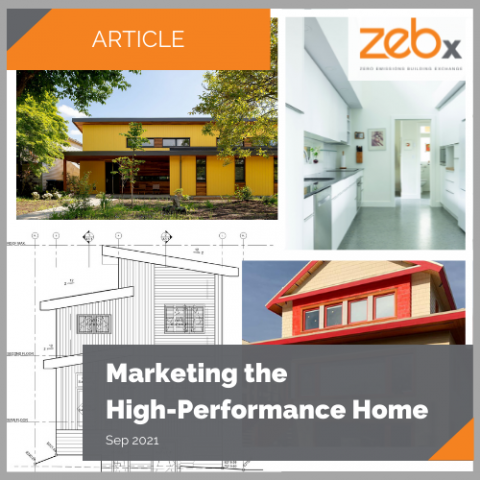 Builders, architects, developers, and marketing professionals must all communicate energy and climate performance. Here’s how.

Even a few years ago, those in the market for a new home didn’t think much about what was going on inside the walls. Energy performance upgrades were firmly on the “nice-to-have” list, behind features such as walk-in closets and kitchen-island prep sinks.

But that’s changing. The climate emergency is now front of mind for British Columbians, and more homebuyers want to be part of the solution. Energy performance loomed large in the 2020 Canadian Home Builders Association (CHBA) national survey of buyer preferences. In a Top 10 list of most desirable features in a new home, four directly relate to increased energy performance.

The third most desirable feature overall—up there with the walk-in closet—is an “overall energy efficient home.” High-efficiency windows come in at number four, and an HRV / ERV is also a priority for buyers, squeaking into the top 10 at rank number 9.

In the same survey, nine out of 10 respondents said they either “really want” or “must have” an energy-efficient home.

Of course, efficiency is one thing—emissions are another. The CHBA’s annual survey doesn’t ask about  low carbon energy systems (LCES)—which provide zero-emission heat and hot water. But as of this coming January, at least in the City of Vancouver, they won’t be an upgrade but rather a requirement across the board. The “climate friendly home” could well be the next “must have.” But how do you explain that to a prospective client or buyer?

“Buyers want to reconsider how they can support the environment,” says Ryan Lalonde, President of MLA Canada. “But they are less clear on what options they have in front of them.” On a recent ZEBx webinar, Lalonde shared his team’s conclusions from marketing Skagen, a Passive House townhome development  in Coquitlam, B.C.

Lalonde recommends those marketing a high-performance Part 9 project, such as a townhome, bundle a project’s energy and climate performance characteristics with other unique selling propositions, such as overall unit size, or flexible spaces—and not rely on thermal comfort, energy savings, or health to carry the sale.

MLA Canada positioned Skagen as a premium project, at the time units started at $979,000—roughly $50,000 to $70,000 above similar-sized units built to code minimums. With that, there was an increase in absorption velocity—the market absorbed the first phase within three months of launch.

The biggest takeaway for Lalonde and his team: A thorough buyer education process. Roughly 35 percent of those who booked sales center appointments had heard of Passive House, but they did not understand its benefits.

“The science of Passive House will not resonate with buyers,” he said. “Instead,“think of it as the European high-performance car version of home construction.”

Lalonde says his company has had success equating a high-performance home with a healthy and mindful lifestyle: “If you are going to source organic food products, it is important for you to understand what was involved in the manufacturing process, standards, and safety. With Passive House, we have that same dialogue on the sales floor.”

Take the perspective that home buyers are exploring in other parts of their lives, and apply to the home: “If you seek premium quality in food, gear, or vehicles, why wouldn’t you consider the best home technology?” he says.

Lalonde also had sample materials in his sales centre, including a wall assembly and a cut-out cross section of a triple-glazed window. Materials used accessible, cheeky language with line drawings to explain what goes on—and doesn’t—inside the walls. He asks potential buyers to allow him an hour to bring them up to speed. The result: High conversion rates.

Buyers are gradually becoming educated about the Passive House standard, and are searching online for information. The chart shows incidence of “passive house” in Google queries over recent years. Numbers represent search interest relative to the highest point on the chart for the given region and time. A value of 100 is the peak popularity for the term. A value of 50 means that the term is half as popular. The trend is generally upward from 2016 to today—with a slight dip in recent searches.

Note that DIMEX highlights the benefits—energy savings, noise reduction, and IAQ—and then explains the home technologies and construction strategies that deliver them. Image courtesy DIMEX Group. (Click to enlarge.)

While many British Columbians baked in their homes during the recent extreme heat event, those living in high-performance homes did not feel a great deal of discomfort. Home buyers will now likely be much more interested in indoor comfort—from extremes of both cold and heat—afforded by beefy insulated walls, an airtight envelope, and fresh filtered air.

In conversations with clients, builders, architects, and realtors often describe a high-performance home as “future-proofed.” But what is the home future-proofed against? Here are a few options to consider.

ENERGY PRICE STABILITY: A high-performance, climate-friendly home uses a low-carbon energy system that in turn consumes a mere trickle of electricity. The owner won’t pay carbon tax on their utility bill, and given that it consumes up to 80 percent of the energy of a current code-minimum home, they will be largely shielded from energy price spikes.

BREATHE EASY: This past June’s heat will not soon be forgotten. A high performance home is built from the ground up to better deal with extreme events, as well as poor air quality from pollution and smoke. A high performance home will double as a refuge from whatever might come our way.
VALUE RETENTION: As more buyers come to understand the benefits of a high-performance home, demand for them will increase, improving the opportunities for a strong resale if and when your client’s housing needs change down the road.

The BC Real Estate Association recently produced BC Energy Step Code: A Primer for Selling Energy-Efficient New Homes, an online self-guided course intended for sales and marketing professionals. Modules walk realtors through the key characteristics of a high-performance home built to the Upper Steps of the BC Energy Step Code, and help them connect those features with value propositions, such as:

The course also offers a number of hypothetical scenarios that a real estate professional might encounter.

For example, a pair of urban professionals living downtown might be interested in consistent year-round comfort and noise insulation. A realtor might encourage the buyers to consider a home built to meet the requirements of Step 5 or the more rigorous  Passive House standard —because it offers a highly insulated building envelope to  keep the home quiet, cool in the summer, and warm in the winter.

Similarly, a family with allergies, a new baby, and a family history of respiratory issues would likely prioritize indoor air quality. Since natural gas cooktops and ovens generate harmful air contaminants in a home, including elevated nitrogen dioxide, a realtor may recommend a 100 per cent electric home, and a well-sealed air barrier to prevent allergens and pollutants from entering into the living space.

A session at the February 2020 Canadian Home Builders Association Net Zero Home Leadership Summit focused on connecting with buyers on an emotional level.

“Don’t sell it like a builder,” said Jennifer Weatherston, then Director of Sustainability at Timberworx Custom Homes, now Vice President of Operations with Doug Tarry Homes. “Sell it soft, use emotional messages to connect with your buyer; understand who your buyer is to know the right message.”

Chris Williams, VP, of Calgary-based Avalon Master Builder, who spoke in the same “Gaining Consumer Uptake” session, emphasised the importance of simplicity. “It is important that we use emotionally relatable terms and ensure simple, short descriptions of Net Zero features.” Testimonials from high performance home buyers are also critical, both agreed, especially descriptions of health benefits for families. Some examples from the presentation follow.

Many of the core characteristics and benefits of a Step 4 or Step 5 home, a CHBA Net Zero Energy Ready home, or one built to a more rigorous standard such as Passive House are not easily visible to the naked eye. As awareness of the benefits of high performance homes grows, architects, developers, and realtors should get up to speed.

As we move into the 2020s and awareness builds, curb appeal and luxury-home bling may ultimately carry less clout with buyers and those looking to build a new home than continuous insulation, triple-pane glazing, and related building performance features. And that’s not a bad thing at all. 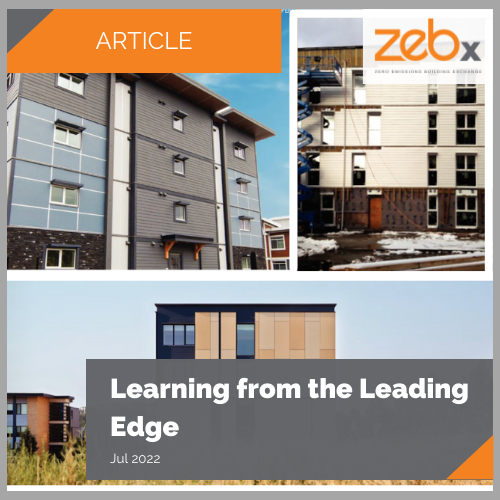 Learn from the Leading Edge: Clean BC Net-Zero Energy-Ready Challenge 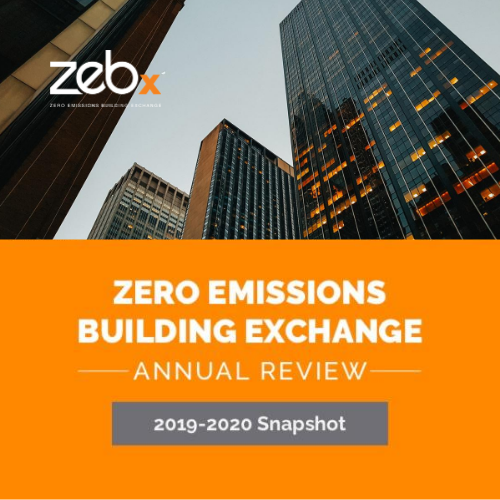 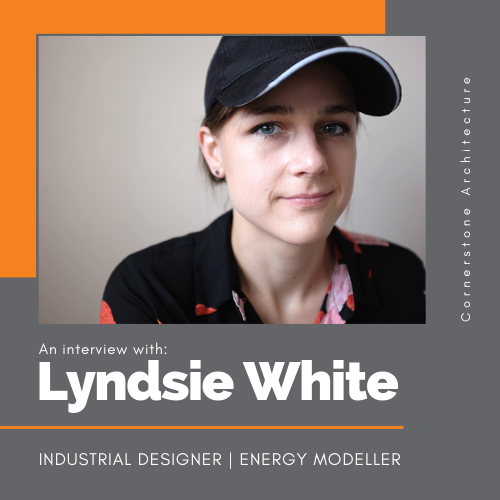 Optimization Through Iteration: the key to designing ZEBs