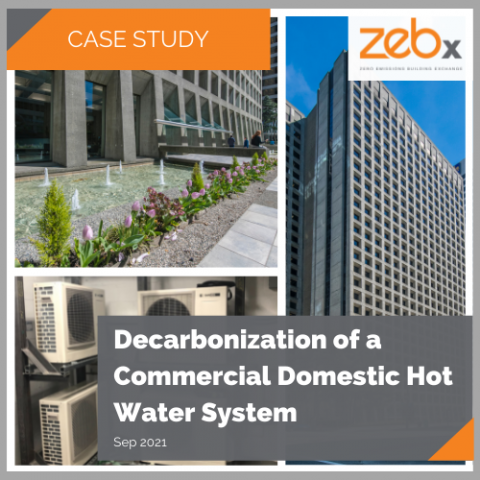 This retrofit project was part of our Deep Emissions Retrofit event on Tue Sep 21, 2021 and was presented by Nicky Arthur, Energy & Sustainability Manager, Colliers. Access slides and more from the event HERE.

Read the Globe and Mail article about this building HERE

Prior to this project, the domestic hot water (DHW) was generated by different gas-fired boilers depending on the season. In the heating season, two large 3,077 MW (10,500 MBtu/hr) gas-fired boilers, dating from original construction, were used for DHW production and also provided hot water for hydronic space heating. These large boilers were turned off during the cooling season and three smaller gas-fired boilers, ranging from 88 MW (300 MBtu/hr) to 147 MW (500 MBtu/hr), were used instead. One of these three smaller boilers provided DHW for the tower and two were dedicated for the fitness centre change rooms. The DHW was stored in two large 1,325 L (350 US gallon) storage tanks, both original to the building.

The copper risers, running vertically through two mechanical shafts beside the elevator shaft, were also original to the building and had begun to leak on occasion. This signalled to Colliers that the risers were approaching the end of their long service life and required replacement.

Each year, Kingsett Capital, one of the building owners, holds an Innovation in Sustainability competition for projects at their managed properties.  For the 2020 competition, Kingsett indicated that they were particularly interested in seeing submissions focused on technologies that are cutting-edge, have not yet scaled up to mass adoption or are new to the Canadian or North American market.  The award prize was a $50,000 contribution towards the winning project.

For its submission to the competition, Colliers proposed to combine the planned replacement of the aging risers with electrification of the tower’s DHW system as a means to significantly reduce the building’s GHG emissions. The electrification project included decoupling the large boilers from the DHW systems, replacing the boiler serving the tower with two sets of all-electric, CO2-based heat pumps for year-round DHW generation, and installation  of new DHW storage tanks. Electrification of the DHW system for the change rooms was not part of the proposal because the two boilers for this system were less than ten years old.

The project won the internal competition, was approved for some additional funding from the CleanBC Better Buildings program, and Colliers was tasked with implementing it.

To begin, the DHW system was assessed by SES Consulting to ensure proper sizing of the new equipment. They began with an audit of all the plumbing fixtures to determine the quantity of fixtures and their flow rates.  SES then used guidelines from the American Society of Plumbing Engineers (ASPE) to approximate the size and number of Sanden SANCO2™Generation 3 heat pump water heaters and the number of Sanden water storage tanks required for the project.  Because the ASPE guidelines can lead to over-sizing of equipment, SES refined the sizing calculations with a third party-reviewed, manual calculation which took into account low-flow fixtures and time-of-day usage patterns for certain fixtures. This ensured that the equipment was more appropriately sized for the specific hot water heating demands of the building.

Because the tower’s DHW system is divided into two loops – one serving the upper 16 floors of the building and one serving the floors below, two separate right-sizing exercises had to be undertaken. It was determined that six heat pumps and four 450 L (119 US gallon) storage tanks would be required for the upper system. Four heat pumps and three 450 L storage tanks would be required for the lower system. Because the original boilers were retained to continue to provide space heating for the building, the new all-electric DHW heating plants required a new home. Non-tenanted space on the top floor and parkade level was converted to secondary mechanical rooms to accommodate the new equipment.

An important consideration for many electrification projects is the electrical service to the building and in particular the difference between the peak demand and the maximum capacity. In this case, the typical peak demand was approximately 1,500 kW, representing less than 40% of the available service. It was determined that there was more than enough spare capacity for an electrification project that would add no more than 100 kW to the electrical demand. The panelboards to which the heat pumps would be connected also had spare capacity and as a result, did not have to be replaced.

PUTTING THE PLAN INTO ACTION

After receiving several bids for the scope of work, Pacific Mechanical Services (PMS) was selected as the mechanical contractor for the project. Similar to many older office towers, there was enough room in the mechanical chase to install a new riser while the adjacent existing riser was in use. This allowed PMS to install the equipment in the new secondary mechanical rooms and connect it to the new riser without disrupting the water supply to the building. Once the new system was tested and commissioned, it was tied into the existing branch piping outside of regular office hours because this part of the work involved shutting off the water supply to the building or several floors at a time. The switchover was completed at the end of April 2021.

According to PMS, a big advantage of the SANCO2™heat pump water heaters is that they can be installed by plumbers, rather than specialized refrigeration technicians, because the CO2 refrigerant is sealed  entirely within the heat pump units. This reduces the installation cost of the system, compared to systems where refrigerant lines are installed in the building.

The project is expected to reduce the building’s GHG footprint by approximately 40 tCO2e/year (at full occupancy). In addition to significantly reducing the building’s operational emissions, the refrigerant used for the heat pump water heater also reduces the risk of contributing to global warming should a leak occur. Other heat pump water heaters currently available in Canada use R410a as a refrigerant. Averaged over 100 years, R410a has a global warming potential that is 2,088 times greater than CO2.

Colliers has recently begun to monitor the energy consumption of the new domestic hot water systems with dedicated submeters. In addition to providing specific energy consumption data for the DHW systems, the submetering should provide a means of detecting most operational issues as they occur. This will allow Colliers to maintain and repair the systems in a timely manner and as a result, maximize the service life of the heat pumps.

Based on an average run time and indoor installation (protected from precipitation and high humidity), the heat pumps are expected to have a service life of 15 to 20 years, with little more than annual or semi-annual maintenance. After the expected service life, it may be possible to simply replace worn out components rather than replace the entire heat pump.

Given how recently the project was completed and the fact that the year-over-year difference in GHGs and electrical consumption values have been skewed by the pandemic, it is difficult to determine representative results. Assuming full occupancy, an increase in electrical consumption of approximately 60 MWh/yr, and taking into account a rising carbon tax (climbing to $170/tCO2e by 2030), Colliers approximates the payback period for the electrification portion of this project to be approximately 15 years. The capital cost portion of the payback period calculation is based on the estimated difference in cost between a new gas-fired DHW system and the installed system, less the financial incentives. The corresponding GHG reduction cost is estimated to be approximately $146/tCO2e (taking into account the incentives but not including any reduction in maintenance costs).

Colliers and SES Consulting are now working with the building owners to develop a net-zero carbon retrofit plan for the building as a whole, with the DHW project forming the first step on this journey. 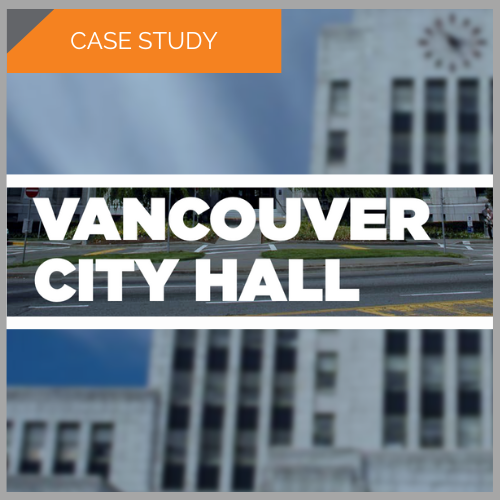 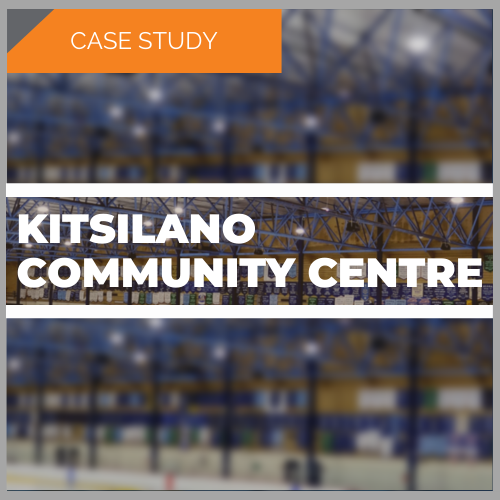 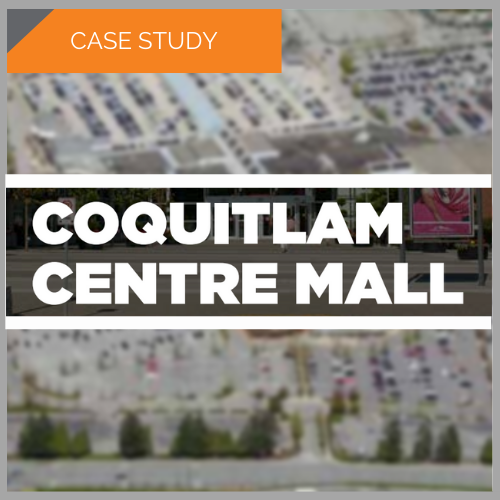