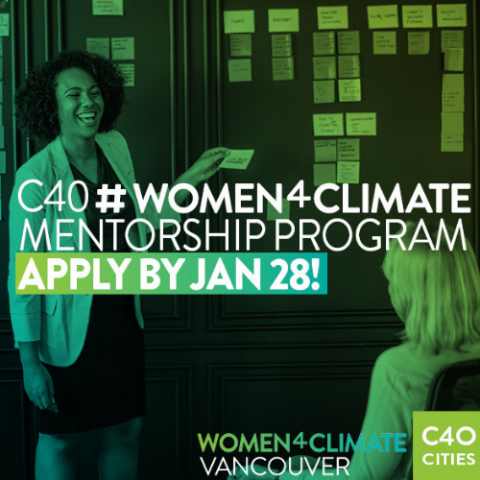 ZEBx in partnership with the City of Vancouver and C40 will support young professional women develop climate solutions through a one year, internationally recognized mentorship program

Vancouver BC – The Zero Emissions Building Exchange (ZEBx) in collaboration with C40 Cities and the City of Vancouver launched the Women4Climate Mentorship Program on Thursday, January 10th, 2019. Developed by the global climate network C40, Women4Climate matches mayors, city officials and committed leaders from the business sector, international organizations and community organizations with emerging women leaders. Mentors share their knowledge and experiences, supporting the mentees to become powerful leaders in their chosen field, including politics, NGOs, business, media and community groups.

C40 is a network of the world’s megacities committed to urgent action on climate change. Representing more than 90 cities, 700+ million citizens and one quarter of the global economy, C40 delivers the most ambitious goals of the Paris Agreement by supporting cities to collaborate effectively, share knowledge and drive meaningful, measurable and sustainable action on climate change.

Vancouver, a C40 member city, has committed to be a 100 per cent renewably-powered city and to reduce carbon pollution by 80 per cent before 2050 through the Council approved Renewable City policies. With buildings currently producing 59 per cent of the city’s carbon emissions (in 2017), higher performance building standards are a key component of the 2050 goal. In 2016, the City of Vancouver released the Zero Emissions Building Plan, which progressively increases new building performance targets, with most new buildings required to be zero operational greenhouse gas emissions by 2025 and all new buildings to have no greenhouse gas emissions by 2030. The Women4Climate Mentorship Program will play a critical role in achieving the City’s climate targets by engaging the next generation of leaders and empowering them with the tools they need to catalyze their zero emission building projects.

“If you are a young woman in Vancouver who feels disappointed at the lack of action on climate change, and wants to help shape our future, I urge you to apply! The Women4Climate Mentorship Programme is a unique opportunity for you to show your potential and help imagine and change the future of our city, our climate and our planet.” – Silvia Marcon, Head of the C40 Women4Climate Initiative.

“Cities need to take bold action on climate change and Vancouver’s Women4Climate program will add leadership to guide us to a future powered by renewable energy.” – Mayor Kennedy Stewart, City of Vancouver

The program matches ten young professional women to ten mentors. Applications are open to any woman working on a project or initiative affecting the green building supply chain. Applications can include initiatives relating to the applicant’s place of work to new entrepreneurial ventures. There are no limitations on the nature of the initiative, and applicants are encouraged to think beyond the typical definitions of “green building applications.” Initiatives can include, but are not limited to urban planning, architecture, finance, tech start-ups, building or project design, community engagement, education and development.

“We are thrilled to support the City of Vancouver in administering this inspiring program, which will be transformative for the participants” said Christian Cianfrone, Executive Director – ZEBx. “True innovation and meaningful progress can only be accomplished when all members of society are engaged. Women4Climate is a critical component in advancing zero emission buildings by supporting women to excel and innovate within an industry that is traditionally male-dominated.”

Applications will remain open until January 28, 2019, and the 10-month program will commence in early March 2019. ZEBx is administering the program on behalf of the City of Vancouver.

C40 Cities connects more than 90 of the world’s greatest cities to take bold climate action, leading the way towards a healthier and more sustainable future. Representing 700+ million citizens and one quarter of the global economy, mayors of the C40 cities are committed to delivering on the most ambitious goals of the Paris Agreement at the local level, as well as to cleaning the air we breathe. The current chair of C40 is Mayor of Paris Anne Hidalgo; and three-term Mayor of New York City Michael R. Bloomberg serves as President of the Board. C40’s work is made possible by its three strategic funders: Bloomberg Philanthropies, Children’s Investment Fund Foundation (CIFF), and Realdania.

About the City of Vancouver

The City of Vancouver’s Greenest City Action Plan,  Renewable City Strategy and Climate Adaptation Strategy shift building and transportation energy use in the entire city to 100% renewables before 2050, and forecast and plan for adapting Vancouver to the future impacts of climate change.

For further information or to arrange an interview with ZEBx or ZEBx partners, contact: